The Ultimate Predator. Found in the Yucatan.

Snowflake is a tigress, who is both a psychopath and survivor, in Dead Rising 2, appears in the unannounced mission Fresh Meat. She is found in the Yucatan Casino with Ted Smith. She reappears in Dead Rising 2: Off the Record with the same role.

When Chuck/Frank arrives at the Yucatan, he is captured by Ted Smith, who has plans on feeding him to Snowflake due to the lack of fresh meat. When Chuck/Frank tries to offer Ted the idea of having Snowflake eat zombies, he denies the proposal, deeming zombies as "spoiled meat".

When Chuck/Frank tries to calm Ted down, he uses the word "slow" that enrages Ted and he has Snowflake attack him. However, Chuck/Frank is able to defeat Ted and tame Snowflake with a few steaks. Once Snowflake is calm, Chuck/Frank can bring her to the safe house.

There is an achievement, Skill to Survive, for taming Snowflake.

Snowflake is a Bengal tigress who is trained to perform shows and tricks in the Yucatan Casino by her master, Ted Smith. Ted has been taking care of Snowflake for a very long time, considering her his only friend. After the outbreak, Ted feeds Snowflake fresh meat whenever possible, claiming that all her food has become rotten, and thus attempts to serve Chuck/Frank to the tigress.

In Fresh Meat, after Ted is killed, Chuck/Frank has the option to kill Snowflake, or tame the tigress to bring back to the Safe House as a gift for Katey.

When saved, Snowflake will stay in the same room as Katey, and can be presented to her as one of the Gifts for Katey.

Snowflake is brought back to the shelter.

Snowflake eating one of the steaks so she will join. 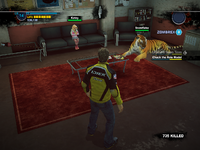 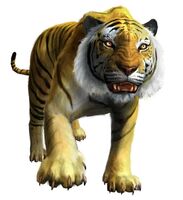 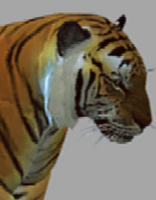 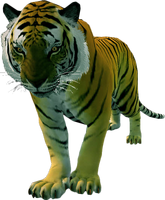