Start a Wiki
watch 02:19
The Loop (Games)
Do you like this video?
Dead Rising 2
Cases and Missions • Characters • Weapons • Stores • Endings

The Soldier of Fortune Skills Pack is downloadable clothing found in Dead Rising 2.

The outfit consists of four pieces of clothing. In Off the Record, the clothing pieces are spread throughout Fortune City.

For Dead Rising 2, the Ninja, Psychopath, Solider of Fortune, and Sports costumes were first offered as pre-order bonuses. After October 12, 2010, a player could purchase these Dead Rising 2 costumes. These costumes can be used during co-op.[2][3][4] Off the Record separates these four costume's parts and scatters them throughout Fortune City for Frank to find or for Frank to earn. 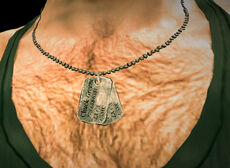 Chuck giving Katey Zombrex
Add a photo to this gallery

Retrieved from "https://deadrising.fandom.com/wiki/Soldier_of_Fortune_Skills_Pack?oldid=390431"
Community content is available under CC-BY-SA unless otherwise noted.