The special forces troops are featured in; Dead Rising, Dead Rising: Chop Till You Drop, and Dead Rising 3.

In Dead Rising 1 and Chop Till You Drop, a group of soldiers are led by Commander Brock Mason on a mission to kill every zombie and survivor in the Willamette Parkview Mall during Overtime Mode on Day 4, September 22, 12:00am.

In Dead Rising 3, the special forces have a major role and are under the command of Gen. John Hemlock.

Each Special Forces soldier is armed with a machine gun and well-geared with body armor and helmets. Whenever Frank kills a Special Forces member he will get 5,000 Prestige Points. Killing 10 in one playthrough will unlock the Legendary Soldier achievement.

Because of these forces, all of the Willamette Parkview Mall is cleared of zombies, except for Leisure Park and the Maintenance Tunnels.

Several Special Forces helicopters can be seen flying above burning buildings while Connie and Dakota were driving in the outskirts of town.

When Ed DeLuca and Frank West were flying into town, they observed a barricade at one of the bridges consisting of barbed wire, sandbags and traffic cones among other items, manned by eight soldiers and an armored vehicle. Flying further into town, after witnessing strange happenings in the main street, several helicopters begin to chase the unauthorized charter helicopter.

On the fourth day, September 22, the Special Forces begin their raid on the mall at 12AM (midnight). At the same time, two soldiers, an escort and his guard interrogate Jessie, telling her that if she signs the Official Secrets Act and pretends she doesn't know anything about the incident, she will be free to go. However, Jessie turns into a zombie, due to her infection by Russell Barnaby, and kills the two soldiers. While the soldiers speak to Jessie, the other soldiers begin their clean-up operation, killing every zombie (and supposedly survivors, too, who have not fled to the Security Room) on sight until 10Am, when they leave the mall due to the zombies continuing to pour in.

In Leisure Park is a helicopter that kills zombies while the soldiers work indoors. In addition to soldiers and a helicopter, Special Forces Drones help clear the mall of zombies, along with any survivors.

The Special Forces troops are equipped with body armor, which completely protects them from handgun fire, grants them a high resistance to every other type of firearm, and a helmet which makes them immune to headshots. The best weapon to use is the Small Chainsaw as this is the quickest way to defeat them. If Frank did not defeat Adam the Clown to be able to use the chainsaws, then the next best weapon is to use the shotgun, but it takes up to 5 or 6 shots. Using the machine gun works but it takes many shots to take them down.

and the same time) is particularly powerful and can instantly kill, it is more effective than all but the most powerful melee weapons.[2]

The Ceremonial Sword is also a good way to defeat them, as it only takes 3 or 4 hits. However, if the Special Forces have already arrived and you don't have it, don't risk going to the theater to get it.

If Frank encounters the Special Forces in "72 Hour Mode", and allows them to deplete all of his remaining health, Frank will immediately pass out and a cutscene will play showing him being held captive by the military, an action that cancels the Unbreakable achievement. As soon as the cutscene ends, the player is given the chance to attempt to free Frank from captivity.

Frank must manage to free himself from the helicopter without being spotted, but the whole process will take some time. If the Special Forces take notice of what Frank is doing, one of them will immediately incapacitate him by striking him with the butt of their Machinegun, and the player will be forced to start over. Each time Frank is incapacitated, 2 hours of in-game time will pass.

If Frank succeeds in freeing himself, he will escape but will be defenseless and in his underwear, having permanently lost all of his items and clothing. If Frank doesn't succeed in freeing himself, the clock will eventually run out and Frank will be airlifted out of the mall as a prisoner, thus resulting in Ending D.

The Special Forces make their way into the mall. 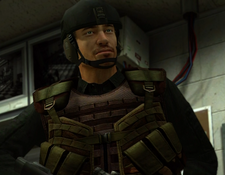 The soldier assigned to guard Jessie.