To get the uniform, destroy the helicopter in Leisure Park and unlock an ending - which also earns you the Hella Copter achievement). Once unlocked, they will appear in the Security Room. To get the boots: defeat ten Special Forces soldiers, and get any ending, which in turn, gives the player the Legendary Soldier achievement.

You MUST first beat the game with the achievement unlocked in order to get the outfit. Like all achievement outfits, this outfit is in a brown paper bag in the Security Room around the air duct. 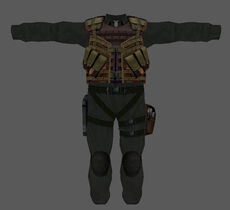 Add a photo to this gallery
Retrieved from "https://deadrising.fandom.com/wiki/Special_Forces_Uniform?oldid=342596"
Community content is available under CC-BY-SA unless otherwise noted.