A sports car is a small two-seat, two-door automobile designed for spirited performance and nimble navigating. It is located in the Royal Flush Plaza, near the exit to Fortune Park, and it is accessible after obtaining the sports car key. It is one of the fastest vehicles in the game, but it has the poorest handling of all vehicles.

The key for the sports car can be purchased from the Just in Time Payday Loans pawnshop on the second floor of the Royal Flush Plaza for $500,000.[1] The price can be lowered with the Bargaining 1 and Bargaining 2 magazines. In Off the Record, the key costs $1,000,000.

This sports car can kill up to 250 zombies before exploding, unless the player crashes, in which case the possible kill count is lowered. Its durability can be increased with the Driving magazine. It can be driven into the Slot Ranch Casino, and, if the blue hallway maintenance doors are open, all the way to the vent that leads to the Safe House. 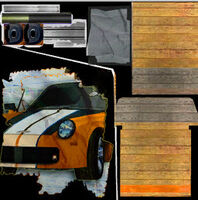 In Dead Rising 2: Off the Record