Honest at heart. Found in the Americana Casino.

Stuart Holmes is a survivor appearing in Dead Rising 2. He is a casino worker who appears in the mission Workers Compensation and is later involved with the mission Stuart's Scheme.

In Workers Compensation, Chuck finds him and Brittany Beck smashing up the Americana Casino slot machines for money, angry at the casino and trying to 'get their wages'. Stuart attacks Chuck at first, and Chuck will need to beat some sense into him before he will join.

In the mission Stuart's Scheme, Stuart will complain to Chuck that he saw him on the TV and he is on to him. If Chuck doesn't stop his mutiny, he will gather a bunch of people and leave.

Should he defect, Stuart will leave the Safe House, along with other survivors, and the next time Chuck leaves the bunker, he will be attacked by Stuart wielding a baseball bat in the area outside of the vents. 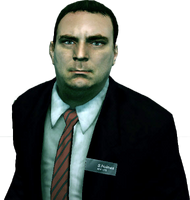 Stuart is brought back to the shelter. 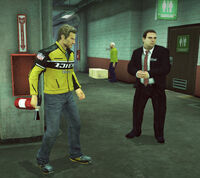 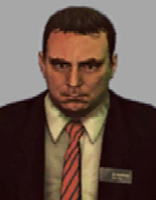