"Put on a smile and use your head to chop zombies to bits!"
—Combo Card Description

The Super Slicer is a combo weapon in Dead Rising 2 and Dead Rising 2: Off the Record, made by combining a Servbot Mask with a Lawn Mower.

Chuck Greene can wear it on his head and headbutt zombies with it, slicing them with the propeller's blades on the top of the super slicer. He can also charge into zombies head first.

"Unlike most Servbot masks in "Dead Rising 2," you can actually wear this one! It's got a lawnmower blade attached to your head and you can charge at enemies, taking them out with gusto."[1]

Chuck must have the combo card first to run with the super slicer.[2][3] 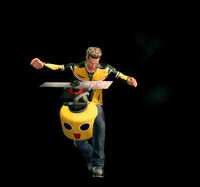 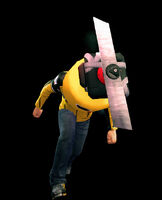 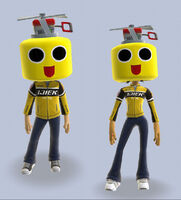 These are avatars that were supposed to be available if a player pre-ordered Dead Rising 2 for the Xbox 360 on Amazon, they include Chuck Greene's familiar motorcross outfit, and the Super-Slicer. This avatar outfit gives a cartoony feel to the weapon. They were never delivered.[4]