A grizzled paramedic. Found in the One Little Duck Bingo hall in the Silver Strip.

"I couldn't save him...I tried so hard. Maybe someone else could have... I'm such a failure."
—Sven after failing to save Tim Duggan

Sven Blaaborg is a survivor in Dead Rising 2. He is found in One Little Duck Bingo during the mission Code Blue. He is a paramedic who is doing his best to help the victims of the zombie outbreak.

He reappears in Dead Rising 2: Off the Record with the same role, though he is found in an alleyway on the Silver Strip.

Sven is found in the One Little Duck Bingo hall, where he is trying to resuscitate a dying victim, Tim Duggan. However, he fails to do so and Tim dies under his care. After Chuck arrives, Sven admits that he knew he had failed to save Tim and rebukes himself for being unable to do so. Chuck tells him that there are other survivors in the Safe House who may require his medical expertise, and Sven agrees to follow him back. Although he states that he might not be helpful, but his medical supplies might.

After being brought back to the Safe House, Sven gives Chuck a dose of Zombrex for his use.

In Dead Rising 2: Off the Record, Sven has dragged an injured Tim Duggan into an alleyway on the Silver Strip where he tries to save his life. However, Tim dies and Sven is distraught. Frank is able to convince Sven to follow him as there are other survivors in the Safe House who need help.

Sven is one of the crazed survivors Frank can fight in Sandbox Mode. He will spawn at the Arena with a tomahawk. Once defeated, he will drop his weapon and $10,000.

Later in the unmarked mission Demand and Supply, Sven asks Chuck/Frank to bring him a bottle of whiskey or vodka for him to treat wounds. After he is given the liquor, he drinks it and rewards Chuck/Frank with an additional dose of Zombrex.

Sven during Demand and Supply

Sven is brought back to the shelter...

...and gives Chuck a dose of Zombrex to express his gratitude.

Sven in the Safe House 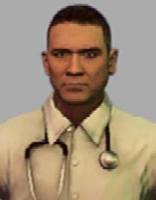