The Sword is a weapon in Dead Rising.

It is an antique blade originally sold as a decorative display, but has since become an effective weapon in the zombie outbreak. Its durability can be increased with the Criminal Biography book. 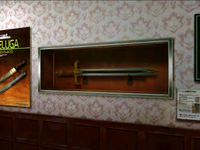