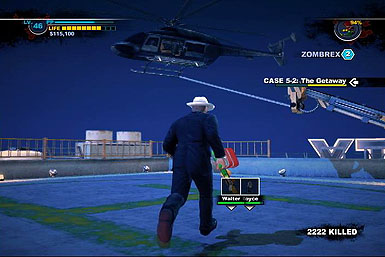 In Case 5-2: The Getaway, TK will try to escape Fortune City via his helicopter and Chuck/Frank must stop him. When he arrives at the hotel rooftop, the helicopter will start to fly away, but Chuck/Frank stops it by hooking a nearby crane's cable to the underside. After doing so, he has to dodge a minigun and slowly destroy the helicopter's blade.

It's best to take a fair amount of health with you before initiating the battle. Destroying the helicopter is actually quite easy; just stay behind cover while the minigun is being fired at Chuck/Frank, then when the crane's light turns green activate it and the helicopter will be pulled into throwing distance.

Throwing a few Patio Chairs or Bricks at it will easily take it out. If you run out of heavy items, throw the Spot Lights found around the edge of the helipad. Otherwise, there are railings, suitcases, and military cases lying around also, with a few cardboard boxes containing a few more thing to throw at the Helicopter. If you are out in the open when the minigun is firing, or when the crane is rotating, use the dodge ability to avoid taking damage, but be sure to move well out of the way when the helicopter swoops down.

Any survivors you bring along will start with you near the crane, so move them to a safe place ASAP, preferably behind the vents where Rebecca is taking cover. Once the helicopter is destroyed, all survivors will be transported with you back to the Safe House.

During the battle, occasionally the Helicopter will pull the crane around in a circle. If Chuck or Frank gets hit by it, it will knock him over, leaving him open to a few rounds from the minigun.

Retrieved from "https://deadrising.fandom.com/wiki/TK%27s_Helicopter?oldid=394124"
Community content is available under CC-BY-SA unless otherwise noted.