Was held captive by Kent.

"I hope you don't snap one day and freak out like that other photographer did."
—Tad, on Kent

Tad Hawthorne is a survivor appearing only in Dead Rising.

He is found outside Colombian Roastmasters on the second floor of Paradise Plaza during the scoop Photographer's Pride. He is being held captive by Kent Swanson.

Frank must save him from becoming one of the undead.

Frank West meets up with Kent Swanson at noon according to their previous arrangement, and finds Tad tied up on the floor. Kent reveals that he is about to photograph a survivor being zombified, and throws a zombie larva next to Tad. Frank quickly stomps on the larva, saving Tad from zombification and ruining Kent's shot at the same time. A furious Kent turns on Frank and attacks him.

After Kent is killed, Frank frees Tad and offers to bring him to the Security Room.

It is absolutely crucial to be in the Paradise Plaza before 12:05 pm as that is when the cutscene will trigger, no matter where Frank is in the plaza. If Frank arrives any time after that, he will be too late and the alternate cutscene will trigger. Besides having to fight Kent, naked and unarmed while chained to the rafters near the roof of the mall with limited reach, Frank will not be able to save Tad.

Tad appears in Marriage Makers in Paradise Plaza from 1:07:00 to 1:19:00 and is armed with a Sword. When killed, he drops a pack of Cheese, an Acoustic Guitar, Dishes, a Push Broom, and a Skateboard. 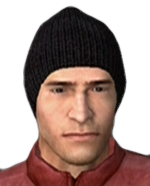 Tad is brought to safety. 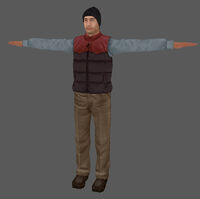 Tad in Kent's photograph
Community content is available under CC-BY-SA unless otherwise noted.