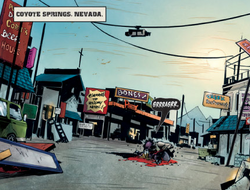 The Coyote Springs Outbreak was an outbreak that occurred in 2008. It is featured in Dead Rising: Road to Fortune.

Some attractions in town of Coyote Springs include Bones, the Petrol Dunk, Creek Restaurant, the Holiday Hotel, Bailey's Casino.

After a zombie outbreak of unknown origin reaches the town, the US Government sends in Special Forces soldiers to clean up the incident.

A squad was dispatched to clear out the zombie infestation in the town. Kushman, Ramirez, and Simmons, led by Captain Kilduff, are several soldiers are involved in the clean-up. At first, the number of zombies in the town does not pose a threat until they encounter a huge horde at the casino. Needing assistance, they call in for Air Support and a fifty caliber machine gun is used to shoot the zombies.

Outside town at the barricade, Rebecca Chang and her assistant Jamie sit in their KDED news van preparing to do a report. After witnessing the explosion that destroyed the casino, Rebecca demands the guard on watch duty to inform her of what is happening in the closed-off town.

Retrieved from "https://deadrising.fandom.com/wiki/The_Coyote_Springs_Outbreak?oldid=368660"
Community content is available under CC-BY-SA unless otherwise noted.