"Could you go to the North Plaza and meet up with Cletus, the gun shop owner? I'd like you to get him to help us if you can. If we can get Cletus to help us, then we'll be able to buy weapons. That would be good for you, too, right?"
—Otis Washington, Chop Till You Drop

It takes place at the first time in the Huntin' Shack in the North Plaza. By entering the store, Frank will meet Cletus Samson, the gun shop owner who has decided he cannot trust anybody but himself.

Frank arrives to the Huntin' Shack to find a fellow survivor trying to reason with the gun shop owner. The owner refuses to let the two men come any closer and shoots his shotgun as a warning. James claims that he just wants some guns so he can survive. Going against Cletus' warnings, he advances towards him and is killed with a buckshot to the chest as a result. James flies out of the store and Frank is left alone to battle Cletus.

After Cletus is tired out from the gunfight, he stumbles out of the store into an undead James and is killed, leaving the gun shop empty and available for Frank to take weapons.

James, attempting to reason with Cletus.

Cletus: You can talk to my 12-gauge. Don't get no closer or I'll blow y'all to kingdom come.

Cletus: Now, goddammit! I warned you... 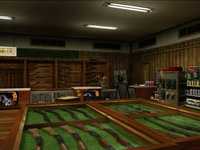 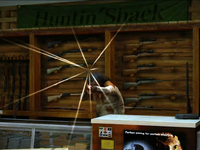 Cletus as an ally in Chop Till You Drop.
Add a photo to this gallery

Retrieved from "https://deadrising.fandom.com/wiki/The_Gun_Shop?oldid=388770"
Community content is available under CC-BY-SA unless otherwise noted.