"There's a woman taking cover inside a children's clothing shop in the Entrance Plaza. Things are lookin' pretty bleak there Frank. You might wanna lend her a hand."
—Otis Washington

The Woman Who Didn't Make It is a scoop in Dead Rising.

In the Entrance Plaza on the evening of the second day, Frank can find two women who have been separated. He will need to reunite the two and bring them to safety.

Upon arriving at Gramma's Kids in Entrance Plaza to rescue a woman, Frank finds Jolie Wu crying. She shares her story on how she was separated from her best friend Rachel Decker. Frank tells her that he is going to find Rachel who Jolie says is in Ladies' Space. As he leaves, Jolie yells for him to wait, and says she wants to go too.

With Jolie in his party, Frank heads to Ladies' Space on the second floor of the plaza and finds a panicking Rachel who refuses to talk to him. When Jolie and Rachel see each other, they hug in reunion. Jolie apologizes for leaving Rachel behind, and Rachel forgives her. Frank then offers to bring Jolie and Rachel to the Security Room. 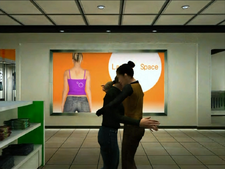 Jolie and Rachel embrace in a hug.

Frank offers to take the women to safety.

Safe in Security Room.
Add a photo to this gallery

Retrieved from "https://deadrising.fandom.com/wiki/The_Woman_Who_Didn%27t_Make_It?oldid=397893"
Community content is available under CC-BY-SA unless otherwise noted.