The TiR Employee is an unnamed victim in Dead Rising 2. He was an employee of the entertainment crew that catered the Terror is Reality game show. He was killed in the Fortune City outbreak. He reappears in Dead Rising 2: Off the Record with the same role.

TiR Employee performed a check up on Chuck Greene's slicecycle prior to his appearance on the Terror is Reality game show. While Chuck competed, he took care of Katey in the green room.

Later, when Chuck was looking for Katey amidst the zombie outbreak in the Fortune City Arena, the employee was found killed by a zombie in the green room, after Chuck Greene mistook him for being Katey, when he saw her backpack nearby.

While Frank is getting ready to go on his wrestling match for the Terror is Reality show, the employee asks him for his autograph. When receiving the signed picture, he exclaims that the picture must be worth a lot if something was to happen to Frank during the show, foreshadowing the outbreak.

Later, after the outbreak has ravaged the city, the body of the employee can be found outside the Arena, the man having been killed. The wind blows away the autograph from his corpse and blows away in front of Evan MacIntyre who then recognises Frank West who killed his brother. 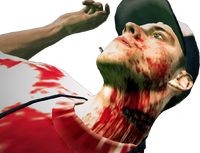 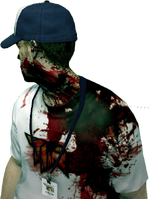 TiR Employee modded to be in the Arena corridor.