Tim Duggan is a victim appearing in Dead Rising 2 during the mission Code Blue. He reappears in Dead Rising 2: Off the Record with the same role, though he is found in an alleyway on the Silver Strip.

Tim was injured by unknown causes and was found at the One Little Duck bingo hall. He was badly hurt and lost a lot of blood, to which efforts by the paramedic Sven Blaaborg failed as he dies from his wounds.

As Chuck arrives at location of the store he is in, "Tim Duggan is dead" will appear, confirming his death. It can be at any given time after Chuck enters the shop name trigger point, when the name of the shop appears onscreen.

Sven tries to save Tim.

The body of Tim. 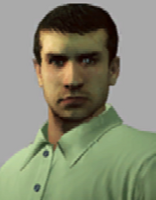