Was standing around talking in the Entrance Plaza.

"He's probably hiding somewhere, shittin' his pants like a chump."
—Todd, on speaking about his friend's whereabouts

Todd Mendell is a victim appearing exclusively in Dead Rising.

He was found in the Entrance Plaza of the Willamette Parkview Mall with his friend Brian Reynolds.

He was killed when Lindsay Harris removed the barricades and allowed the zombies to break into the plaza.

Todd was found talking to Brian Reynolds in the Entrance Plaza about one of his friends. When the zombies broke into the plaza, Todd was one of the first to be killed before he had a chance to run for the stairs.

In Infinity Mode, Todd appears at the Heliport from 4:00:00 to 4:07:00 and he is armed with a Paint Can. In his equipment he carries Thawed Vegetables, a Nightstick, a Push Broom Handle, an Acoustic Guitar and a Bowling Ball. 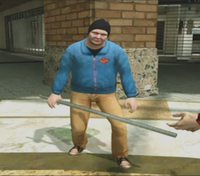 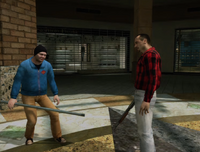 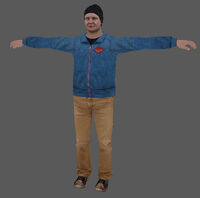 Model of Todd Mendell.
Community content is available under CC-BY-SA unless otherwise noted.