"Arigato. You show signs of strong fighter."
—Tomomi, after being rescued

Tomomi Miyamato is a survivor in Dead Rising 2: Off the Record. She is found in the Underground beneath the Palisades Mall being attacked by thugs during the mission, Wax On Wax Off.

Frank is alerted that there is a woman being shot at in the Underground. Upon investigation, he finds Tomomi hiding under some shelves as a group of Tyrone King's mercenaries are shooting at her. After the goons are killed, Tomomi agrees to be evacuated to the Safe House, but will not accept any weapons, taking pride in being a world-class karate champion.

In Case 7-4: Breach, when the shelter is breached, she is seen being attacked by a crowd of zombies.

it's unknown if she survived in the original timeline but it's possible she did escaped when the zombies were free from their cage. 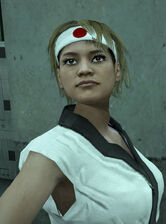 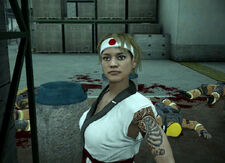 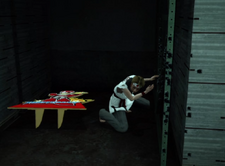 ...and she compliments him before joining.

Safe at the Safe House. 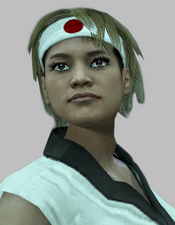 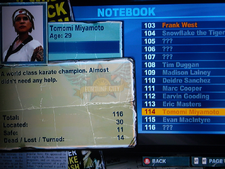