"These dead folk had me runnin' like a scalded dog but if a heroic man like yourself needs some company. You come an find lil' Trixie-Lynn, you hear?"
—Trixie-Lynn, after being rescued

Trixie-Lynn Horton is a survivor in Dead Rising 2. She is found with her husband, Elrod Bumpkins, in the Fortune City Arena during the mission Barn Burner. She also may challenge Chuck to a game of poker in Ante Up. She reappears in Dead Rising 2: Off the Record with the same role.

Trixie is found at the Arena with Elrod inside a room, trapped by fire after setting ablaze to several protestor signs in attempt to keep away the zombies. Once Chuck uses an fire extinguisher, she can be recruited in order to be brought to the safety of the shelter.

After being escorted back to the Safe House, she and two other survivors may challenge Chuck to a game of strip poker in the mission Ante Up. If she is defeated, she will be stripped of her clothing until rescue arrives.

Trixie-Lynn is one of the crazed survivors Frank can fight in Sandbox Mode. She will spawn in Atlantic Casino with a stand. Once defeated she drops her weapon and $10,000.

Trixie-Lynn scared of the failed rescue.

Trixie-Lynn is brought back to the shelter. 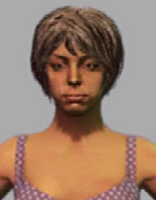