The True Eye is a group of psychopaths in Dead Rising, Dead Rising: Chop Till You Drop, and Dead Rising 4, also called the Raincoat Cult. They are an organized group of cultists led by the religious zealot Sean Keanan. The followers wear long yellow raincoats and green masks.

The cultists make their first appearance attempting to sacrifice Jennifer Gorman, near the entrance to Colby's Movieland in Paradise Plaza on Day 2, September 20 at 1:00pm in the unannounced scoop The Cult with their leader Sean Keanan. Afterwards, they can be found in small groups in various plazas of the mall. Once A Strange Group is completed or has expired, the cultists will no longer appear.

Like the convicts, they don't count towards any psycho achievements, but Frank will get a 500 prestige point bonus for every one he kills. They are more difficult to kill than zombies.

The True Eye cult is a mysterious extremist organization. Several posters around the Willamette Parkview Mall advertised the cult's presence and purpose, yet it is ambiguous as to whether or not the organization was founded before or during the initial stages of the Ampulex Compressa Giganteus outbreak in Willamette. It is also unknown if Sean Keanan, the leader encountered by Frank West, was the original founder or an individual who took power once the epidemic reached its height.

True Eye consists of several individuals who believed in an unknown extent of religious worship and belief. Several encounters between Frank and the cult revealed some aspects of their beliefs; Sean and his followers believed by killing, or "sacrificing" other survivors, or "heretics" (those who are not affiliated with their organization), they would be spared from the ravenous zombie hordes and the possible reality of reanimation. Their religious-influenced actions were displayed as fanaticism, evident by the cult's readiness to commit violence against any other survivor who wasn't part of their organization.

Their primary base of operations during the time-frame of September 19th to September 21st was Colby's Movieland. The cult seemed to have cleared the movie theater of the zombies and transformed the individual cinemas for their own purposes. A secondary base was established in a secret warehouse room near Leisure Park. This base was filled with a variety of equipment, including a ceremonial area where they sacrifice survivors after stripping them naked. There was also a set of cameras and relevant equipment also in the room; it is possible that is was used to record the cult's extremist and insane actions.

The exact amount of True Eye members is unknown. Their presence in the Willamette Parkview Mall was one of the strongest and most organized in terms of numbers, second only to Frank and Brad's security room survivor group. Seeing as True Eye had the manpower to run two locations and terrorize local survivors, it can be safely assumed there were many more survivors of Willamette than previously guessed.

Frank first encounters the cultists on the afternoon of September 20, when they are about to sacrifice a captured woman. Their leader, Sean Keanan, sees Frank from afar and declares him a heretic, sending his followers to attack him. After Frank defeats the cult members, he is able to free Jennifer Gorman and escort her back to the Security Room.

After their first appearance, they can be found around the mall in large groups, completely oblivious to anything but Frank as he travels around the mall.

Frank enters Theater 4 in Colby's Movieland to find Sean Keanan about to sacrifice a group of survivors. He intervenes in the sacrificial ritual, and Sean attacks him.

After Sean's defeat, Frank can rescue Ray Mathison, Michelle Feltz, Beth Shrake, and Nathan Crabbe. Using the Movieland Warehouse Key, he can also rescue Cheryl Jones. Sean will drop his ceremonial sword, which will respawn in Theater 4 each time Frank enters. The book, "Brain Washing Tips" will also be available alongside the sword.

After the scoop is completed, no more cultists will be seen, as Frank presumably killed the last of them when they enter the theater after Sean's death.

The cultists have four main attacks:

True Eye cultists can be seen in small to large groups, praying and chanting together all at once. If Frank gets too close to them, they will become aware to his presence. When this happens, they will draw out a hunting knife and creep slowly after Frank. In close ranges, they will either stab Frank or blow knockout dust in his face. At long range, they can charge forward in a straight line with their knife held out in front of them; this attack does heavy damage if it connects. If their health is mostly depleted, they will pull out a bundle of dynamite and attempt to blow themselves up, taking Frank with them.

True Eye cultists have noticeably more health than zombies; even at maximum attack power, they can take two swings of the Small Chainsaw to kill. The best way to defeat them is to shoot from afar or attack them with a strong melee weapon when they are distracted with chanting. They can be easily disposed of with one to two shots to the head from any gun.

On effective way to kill them is with the Machete. If Frank has not maxed out on attack power, the Machete is just as effective as the small chainsaw in dealing damage, but is a bit faster (there's less of a pause between swings of the Machete).

With certain weapons, such as the Paradise Plaza orange potted plant and the bench, the cultists will usually die with one hit but occasionally they will stay alive just long enough commit suicide by blowing themselves up, instead of dying by the weapon.

When they knock Frank out with some sort of gas, they will strip him of his clothes and weapons leaving you with nothing but his underwear, camera, journal, and his headwear if he is wearing any. Frank must kill all the cult members in their hideout located in Leisure Park to get out.

Frank can use the Cultists' suicidal attacks against them by leading the charging explosive maniac near the pack, allowing him to grab Frank, and then shaking him off. When he explodes, he blows up several of his companions.

Use firearms and fight from medium to long range to avoid getting captured by the Cultists, such as the Shotgun and Handgun. Pick the cultists off from a safe distance. If Frank has to get close and does not have a powerful melee weapon, the easiest way to kill the cult members is to take a bench and hit them in rows.[1]

Like survivors and Frank, Raincoat Cult members do not slip and fall on certain food and weapons like zombies do.

Cultists also have knock out powder they occasionally spray at Frank. If Frank is gassed, he is captured, put in a box and taken to the Cultist's Hideout in Leisure Park. All of Frank's weapons and clothes are taken and lost.

The room has two Step Ladders, two Cardboard Boxes, which could have health or a weapon inside, and a sword. Once Frank kills all of the cultists, he learns the passcode to get out of the locked room.

The cultists will keep appearing in several locations in the mall until Frank completes the A Strange Group scoop on Day 3, September 21, at 12:00am or waits for it to expire at 10:00 am. 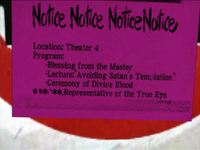 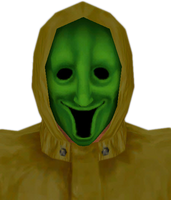 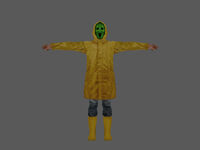 Model of a cult member.

A cultist's last effort to finish Frank off.

Blanket in the hideout. 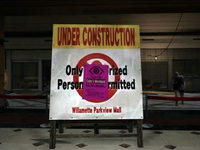 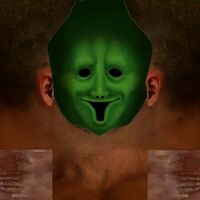 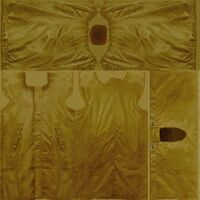 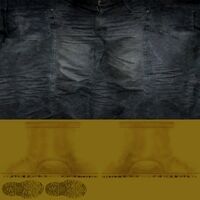