Terror is Reality host and producer

Host and producer for the controversial pay-per-view television game show "Terror Is Reality."

"Do you know what time it is, America!? Payback time!!"
—Tyrone King

Tyrone King, better known as T.K., is one of the main antagonists of Dead Rising 2 alongside the Phenotrans Corporation. He is the notorious host and producer of the equally controversial, but insanely popular, pay-per-view game show Terror is Reality sponsored by Zombrex. T.K. has no qualms about killing zombies for entertainment, as it pays well. Always on the lookout for the next big business opportunity, it is all about money for T.K. He is generally accompanied by the twins, Amber Bailey and Crystal Bailey, his two co-hostesses and bodyguards.[1]

King reappears in Dead Rising 2: Off the Record with the same role, as he helps cause the outbreak in Fortune City by working with Brandon Whittaker. He also kidnaps Rebecca Chang in Overtime Mode.

Before entering the show business, King was in the music industry. He recorded a hit album, "Long Live the King", which Left Hand Lance called, "...one of the best hip-hop albums since Rum DMC's Raising Hell"[2] and soon became a music producer, establishing Kingtone Records. His company was able to rack in some musical talent, including Connorboy, Sultry Q, The Element, and Trif. Apparently, though through "unsportsmanlike" practices, he was able to overcome rival producers including YRN, Dapper Records, and Schmitty Sounds.[3]

Two years after the Willamette Incident and the spread of the zombie plague throughout the country, King was hired by the producers of Terror is Reality as the show's host. After the show's popularity skyrocketed, King also became the show's executive producer.

In Terror is Reality XVII in which Chuck participates in, the instrumental version of T.K.'s “Pernicious Prince” played at the event's introduction.[4]

In Issue #1, the first-ever mention of T.K. in the Dead Rising history of events occurs when Clay Hurlton calls TK on the phone to describe his new idea, the "TIR" show. T.K. has dialog in this scene but is not pictured.

In Issue #3, the first visual depiction of T.K. occurs as he is in a limousine en route to the Las Vegas Arena with Amber and Crystal Bailey to attend the Las Vegas 250 on September 11, 2008. Clay calls T.K. to find out why he is late. T.K. explains that he and the Twins "...got a little held up at the hotel, know what I'm sayin'?", which seems to infer sex but may be an allusion to other illicit activities. T.K. assures Clay that they are almost there as the limo passes the Las Vegas sign.

Later Clay calls a second time checking on T.K. This time, T.K. says they, "...just pulled over for a quick pit stop" and would be "..heading out in a few". While on the phone, Clay sees the zombie outbreak sweeping the arena and warns T.K. to get out of Las Vegas. T.K. takes this advice and orders his driver Jerome to get them out of the city. While still on the phone with T.K., Clay is killed by a zombie that has gotten into his skybox.

King presides over the TiR event in Fortune City that Chuck Greene competes in. During Case 2-2, Chuck encounters King and a gang of Mercenaries in the underground tunnels beneath the city, loading equipment onto a train. King spots Chuck and orders his men to kill him. Chuck defeats them and chases after the fleeing train on a dirt bike, but Tyrone ultimately escapes. Chuck returns to the safehouse, where he realizes that King was likely the one who framed him for causing the outbreak. Later, during Case 5-2: The Getaway, after foiling King's plans to rob all the vaults of the city's four major casinos, Chuck confronts him on the roof of the Fortune City Hotel, where he is planning to escape the city in a helicopter. Chuck manages to attach a construction crane's cable to the chopper, preventing it from taking off, then forces it down by damaging its engine; Tyrone is knocked unconscious in the process, and Chuck takes him back to the safehouse, where Raymond Sullivan handcuffs him to a gurney to keep him from escaping. He admits to having Chuck framed for the bombing at the Fortune City Arena, but refuses to reveal anything more.

During the military cleanup operation, when the soldiers begin to become overwhelmed by the Gas Zombies, King tells Chuck that the outbreak was not his idea, and he has been working under orders from the same people who are flooding the city with the mutagen gas. After Chuck returns from rescuing Rebecca Chang from Sgt. Dwight Boykin, he finds that the safehouse's bulkhead doors have been sabotaged, and a throng of zombies begins pouring in and attacking the survivors. After Chuck fixes the door, he finds King free from his handcuffs and being attacked by a lone zombie straggler. After killing the zombie, Chuck sees that King was bitten during the attack. Realizing that he will likely turn soon, King begs Chuck for a shot of Zombrex. Chuck can either allow King to die or comply with his request; the latter option unlocks Overtime Mode after The Facts has been completed.

During Overtime Mode, Chuck returns to the safehouse in an evacuation chopper after killing Sullivan, only to find that King has escaped and kidnapped Katey and Stacey, and left no trail. Chuck has nothing to do other than watch the security cameras and hope he sees something. King announces to Chuck, on the receiver he acquired earlier, that he had taken Katey and Stacey hostage and wants Chuck to bring him some items found throughout Fortune City and bring them to the Fortune City Arena if he ever wants to see them alive again. Katey is in need of more Zombrex just after King kidnaps her, so the villainous producer is decent enough to give her the medicine, his excuse being he "doesn't want her to miss the show."

After Chuck arrives at the arena with the items, King knocks him unconscious and hangs him upside down, while he is forced to watch Katey and Stacey get slowly lowered to the floor beneath, which is swarming with zombies. Chuck escapes and attacks King, weakens him enough to make him collapse, and rushes to the crank to bring the hostages up away from their doom. King grabs Chuck's leg, holds him against the rail attempting to strangle him, saying his line from Terror is Reality: "You gotta be willing to risk it all if you're ever really gonna..." and gets thrown over the rail by Chuck, who finishes the line by saying "...win big." King falls to his death, and the zombie horde immediately starts feeding on his corpse.

(NOTE: Ending S and Ending A are both considered canon, being that Capcom confirmed Ending S as canon in E3 2013, it's more than likely that Ending S leads into Ending A after Chuck, Stacy and Katey leave the arena)

After getting a helicopter and landing on the helipad of the Safehouse to pick up both Stacey and Katey, Chuck notices Katey's backpack had fallen off her as she slept. Quickly going to pick it up near the elevator, Chuck's arm is grabbed by TK, now a zombie and having found his way through the Safe House. Chuck fends for himself against TK and three more zombies as he gets cornered in the elevator, telling Stacey to go and take care of Katey before the elevator doors close, leaving him to fight against the zombies.

Right after turning into a zombie and pulling Chuck into the elevator Zombie TK pins Chuck down and almost bites him, before he can however the elevator doors open revealing a partially hidden Frank West. Frank uses the wooden bat in his hand to break the zombie TK's skull, killing him instantly.

Tyrone King is observed in conversation with CURE recruit Brandon Whittaker in the backstage area of the Arena. After he is captured from the failed casino heist, he reveals to Frank West that Brandon was the name his superiors gave him to plan the explosions and outbreak with, saying he was doing it for the money. After being bitten by a zombie during the Safe House security breach, T.K. begs for a dose of Zombrex from Frank.

In Overtime Mode, after the survivors are evacuated, T.K. manages to kidnap Rebecca Chang from the security office in the Safe House and hold her hostage at the Arena. After blackmailing him to obtain items from throughout Fortune City, T.K. ambushes Frank and throws him into the zombie wrestling ring with no weapons or items. Frank escapes with help from Rebecca and fights T.K. on the catwalk above the ring, and T.K. is killed when Frank throws him down to the ground below. 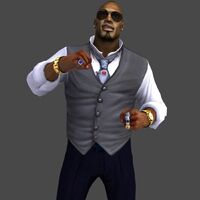 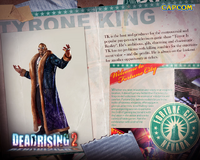 T.K. and the Twins in a TIR promotional poster. 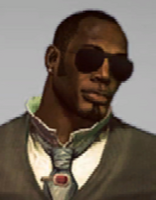 TK falling to his death