The utility cart is helpful at low levels, as the player cannot move very fast. When pushing the cart, the player runs faster than normal.

If the player repeatedly loses their grip on the utility cart, a prompt to pick up the cart will instead be shown. To push the cart again, the player must pick it up and then press

to place the cart down in an upright position.

In Dead Rising 2: Case Zero, the utility cart has infinite durability. The cart can be used to easily complete the Zombie Exterminator achievement by killing 1,000 zombies. It is only available during Case 0-3: Broken Bike. 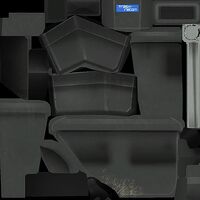