Off the Record
Uranus Zone

"Does this place use green technology?"
—Vikki, after being rescued

Vikki Taylor is a survivor in Dead Rising 2. She is found in the restrooms at the Americana Casino during the mission Chuck the Role Model. She has been captured by a CURE member who has become a psychopath, and is planning to infect her with a zombie.

In Dead Rising 2: Off the Record, Vikki is involved in Case 2-2: A Familiar Face where she is murdered by Brandon.

Vikki was listed by Gretchen Peregrine on the August 6, 2010 Tape it or Die blog post as one of the members whom they would meet with in Fortune City.

In Dead Rising 2 Vikki is found in the restrooms at the Americana Casino, where she is tied up by the psychopath Brandon Whittaker. As Chuck Greene arrives, Brandon explains that he plans to follow up on what he perceived to be the mission that Chuck had started, by infecting the entire world and turning everybody into zombies. Vikki pleads for Chuck to help her out.

After Brandon is defeated, Chuck frees her and helps her to the Safe House.

Later in the mission Fortune City Botany Club, Vikki begins to worry about a species of plant exclusively native to Fortune City. She requests Chuck to rescue a specimen of it from The Cleroux Collection in the Palisades Mall, stating that Chuck has to do so to save the ecosystem.

Vikki Taylor in captivity in Off The Record.

Vikki behind Brandon in Dead Rising 2.

Vikki behind Brandon in Off The Record.

Vikki looks at the zombie in Dead Rising 2.

Vikki looks at the zombie in Off The Record.

Vikki watchs Brandon who is about to attack on Chuck.

Vikki is brought back to the shelter, "Does this place use green technology?" 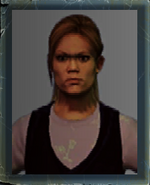 Vikki Notebook Entry in Off The Record.

Off the Record: Brandon drags Vikki in Case 2-1: CURE-ious Information.

Off the Record: Brandon drags Vikki in Case 2-1: CURE-ious Information. 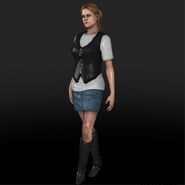