Off the Record
From Fortune With Love

"What does a vegan zombie eat? Graaaiiinnssss!"
—Walter's joke

Walter Morris is a survivor appearing in Dead Rising 2 during the mission Two's Company. He can be found in Hot Excitorama arguing with his fellow comedian Royce St. John. He reappears in Dead Rising 2: Off the Record with the same role, though he is found in From Fortune With Love in Uranus Zone.

In Two's Company Walter is arguing with Royce over who is the better comedian. When they notice Chuck, they will each tell him a joke, and ask him who is funnier. Chuck must give a trophy to the one he thinks is better for them to join. If he is given the trophy he wont let go of it and Chuck must pay Royce $5,000 to join and when Walter's holding the trophy it makes him unable to use different weapons or food items. If Chuck does not give Walter the trophy he will cry all the way back to the Safe House. 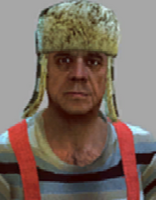