The Weapon Cart is a weapon found in Dead Rising.

The weapon cart and shopping cart can be picked up three ways: 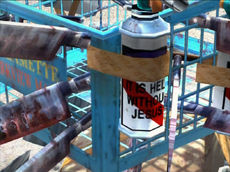