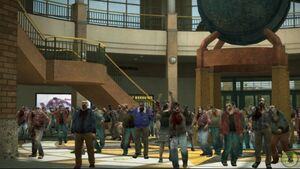 See the Dead Rising Timeline for a list of all the important events that occurred during this incident.
See 72 Hour Mode for a full description of Frank West's ordeal in Willamette.

The Willamette Incident was a series of events that took place in Willamette, Colorado from September 19 through September 22, 2006.

The four-series comic book, Dead Rising: Road to Fortune, revealed the aftermath of the Willamette incident and what happened to survivors Frank West and Isabela Keyes.

The United States government tried to cover up the story as a simple riot, though this couldn't be further from the truth. The town was in fact under attack from zombies.

The zombies arose when Carlito Keyes unleashed the Ampulex Compressa Giganteus species on the town in revenge for a similar outbreak in the Central American town of Santa Cabeza accidentally caused by the US government, resulting in the death of his friends and family. Special Forces were sent into Santa Cabeza to clean up and destroy any evidence of the outbreak, zombies and survivors included.

The town of Willamette, with a population of 53,594, soon became crippled under the force of the undead. Bands of survivors retreated to the town's only source of entertainment; the Willamette Parkview Mall, and barricaded themselves inside. Carlito himself had set up a hideout within the mall, where he monitored the survivors, and kept tabs on activity outside the mall.

When news about Willamette being quarantined went public, idealistic photojournalist Frank West set off to cover the story and make a name for himself. However, when he arrived, the entrance to the mall was breached and the zombies flooded in.

Frank quickly discovered the real situation, and took it upon himself to solve the case behind the outbreak with the help of DHS agents Brad Garrison and Jessie McCarney. Another source of help came in the form of Carlito's younger sister; Isabela Keyes. Isabela shared her brother's grief for the people of Santa Cabeza, but was able to accept that the outbreak was an accident, and the intentions of the research conducted there were good.

After learning of the full truth, Otis stole a Military Helicopter and saved all the survivors Frank had recused by taking them to a safe area. Frank and Isabela escaped Willamette through the tunnels and spread the truth about both incidents to the public. The US government was forced to admit responsibility for Santa Cabeza, but they blamed Willamette solely on terrorists (which, in a sense, was true).

The cleanup operation in Willamette left the town devoid of any form of life, and still remains sealed off by the government. The public were still in shock at the thought of another occurrence like the Willamette Incident, but soon let it fade from their minds. Frank West was commended for his actions in exposing the truth behind the Willamette Incident and for a time, he went on to accumulate great fame and fortune.

Isabela Keyes was prosecuted for her role in the outbreak, but rather than go to prison, Isabela accepted a position in the pharmaceutical organization Phenotrans as a researcher. Using her superior scientific knowledge, Isabela went on to create what is currently known as Zombrex, a drug that hinders the zombification process permanently if taken at the required time each day. It was hailed as a miracle drug, but Isabela's good intentions were soon exploited by Phenotrans as they began causing new zombie outbreaks to increase demand for Zombrex, which in turn served to drive up their profit margins.

Phenotrans made sure to keep themselves from being exposed as criminals. Cover stories were put in place while the company continued to receive universal praise. One particular outbreak orchestrated by Phenotrans took place in Fortune City, Nevada, a story that is covered in Dead Rising 2.