A big cheese in Fortune City. Found at an ATM in the Slot Ranch Casino.

"I will not let all this money go for nothing. That would be letting the zombies win."
—Woodrow during Bank Run

In Dead Rising 2, Woodrow is stealing cash from the Slot Ranch Casino cashiers. He agrees to leave to the Fortune City Emergency Shelter with Chuck, only if Chuck helps him heist the remaining cashiers in the casino. Once in the Safe House, he will award Chuck $50,000, in an effort to prove that he is not so greedy.

In Dead Rising 2: Off the Record, Woodrow is stealing cash from the Shamrock Casino cashiers. He agrees to follow Frank to the Fortune City Emergency Shelter, only if Frank helps him heist two more cashiers in the Silver Strip and a third cashier in the Paradise Platinum Screens (Dead Rising 2) on the Platinum Strip. Once in the Safe House, he will reward Frank with $50,000.

After being escorted back to the Safe House, he and two other survivors may challenge Chuck to a game of strip poker in the mission Ante Up. If defeated, he will remain partially naked until rescue arrives. 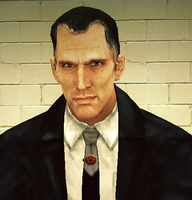 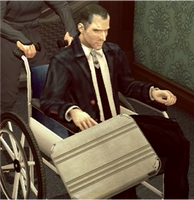 Woodrow in a wheelchair.

Woodrow upset over the failed rescue. 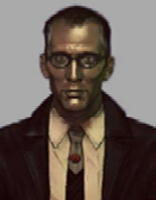 Screenshots of Woodrow's megaman helmet and the design on his shorts.

Characters with helmet. Only accessible with a mod

Characters with helmet. Only accessible with a mod