In Dead Rising 2: Case West, zombie handlers are Phenotrans employees that work in the Nevada Phenotrans Facility. They are dressed in bite proof suits with protective headgear and gasmasks. All are armed with an Electric Prod to help them handle the zombies either during manufacturing, processing or experimenting, in the Holding Pens.

As Chuck Greene and Frank West investigate the facility, the zombie handlers are busy trying to control the released zombies.

Occasionally the handlers may attack Chuck and Frank and try to capture them by putting them into headlocks. 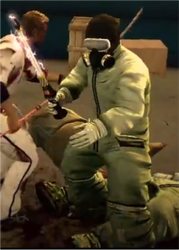 A Zombie Handler
Add a photo to this gallery
Retrieved from "https://deadrising.fandom.com/wiki/Zombie_Handlers?oldid=389973"
Community content is available under CC-BY-SA unless otherwise noted.