Zombies are people infected by mutated wasps or other zombies, either through stings or bites, appearing in all games in the Dead Rising series.

Their only purpose is to find, infect, and devour humans. They were previously human beings who were infected with the parasitic larvae of an unknown experimental wasp. Zombies are rather fragile and easier to kill than uninfected humans.

When bitten by a zombie it takes on average around 24 hours to become one, though it varies greatly from person to person, and can sometimes depend on where the person is bit (for example, a person bit in the neck will transform within seconds and this is shown in Dead Rising 2, while an arm bite may take longer). However, if a person is bitten by more than one zombie multiple times, then this may quicken the process.

The only exceptions are perhaps Frank West and Chuck Greene, who both sustains many bites from zombies over the course of the game and never become a zombie, and Nick Ramos, who is immune to the infection. This is meant for gameplay purposes, but Isabela notes that Frank does have a high resistance to the infection. Gretchen Peregrine explained that a bite needs to be somewhat deep to infect a person.

A fully infected Zombie is significantly different from what it was as a human, the larvae fully develops and renders its host incurable. The physical appearance of zombies is drastically altered, their skin is rapidly drained of color, leaving all zombies with a pale bluish-grey hue. Their eyes also lose a significant amount of color, possibly as a result of dehydration.

Large wounds are commonly found on zombies, although it is not known if they are an effect of the infection, accidental wounds brought on by lack of sensitivity to pain, or where the infected was initially bitten. Zombies display a complete lack of pain sensitivity, being able to function with gaping wounds and missing limbs, only succumbing when fatally wounded or from bleeding out.

As a result of the infection, zombies are incredibly fragile, being fatally susceptible to attacks that would merely wound an average human. Zombies are also incredibly slow, only increasing their movement speed mildly while hunting prey. Despite these limitations, zombies are still quite strong, able to quickly overwhelm healthy humans and smash through barricades. Some zombies carry very basic weapons, but cannot use them efficiently. Likely due to the noctural nature of the larvae, zombies become notably stronger, faster, and more aggressive at night.

As a result of their brains functionally dying, Zombies lack any semblance of human intelligence, acting more akin to mosquitoes searching out new prey than a regular human. They have no sense of strategy, frequently killing themselves in pursuit of prey. Zombies lose the ability to speak, lacking the intelligence, and only retain the ability to mindlessly grunt, which does not appear to be communicative, to humans or fellow zombies.

There are several types of zombies that are different than the normal ones.

Dead Rising: Chop Till You Drop[]

Thin brunette in a red blouse

Laid back zombie with glasses

At night, zombies become more aggressive. This can easily be observed in any zombie due to its glowing red eyes during this time or by looking at zombies near a Queen that has its eyes red as well. Zombies can also take much more punishment at night. For example, a Level 50 Frank can jump kick a normal zombie, killing it in one hit. At night, however, it takes two kicks. Between 7pm to around 7am daily, zombies are aggressive with more endurance and red eyes. If Frank stays on one load screen, the zombies never lose their red eyes and evening aggression.

Unlike Dead Rising, zombies in Chop Till You Drop are weaker at night.

Using a Rat Stick at level 1, one of the weakest weapons in the game, a player can determine precisely how strong zombies are in comparison to each other. Frank at level 50 kills the zombies much faster. For example, it takes 6 hits to kill a fat man with a rat stick at level 50, and 15 times at level 1. Nighttime is at 7:00 pm every day, when the zombies eyes become red, making them "stronger, faster, and much more violent".[1]

After completing the game, Frank can earn more Prestige Points depending on the number of zombies killed over the course of 72 hours in the mall:

Sometimes Frank may see a zombie that looks like a survivor but recolored and zombified. Zombies who look similar to survivors include:

If a survivor's health is fully depleted from attacks by zombies, one of death scenes is triggered showing him/her being killed by the zombies in a gruesome manner.

If you go to where he/she dies, you can see that he/she has risen as a zombie and will behave accordingly. The notebook will also list him/her as Undead. This works for all survivors and psychopaths.

If the survivor's health reaches zero for any reason other than being attacked by zombies, then he/she will simply lie there, not rise up, and be marked as Dead in the notebook. See the video to see the different death scenes. There is a chance that a survivor's death scene from a zombie attack will include them carrying a pistol (even if they're not carrying one when they die) and committing suicide rather than being eaten, they then appear as dead instead of undead.

For some reason, in Dead Rising 2, the death scenes only play in certain locations,[Verification needed] and are difficult to trigger. 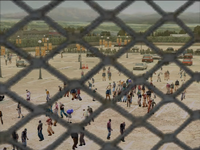 A male zombie killed with a small chainsaw.