For other uses, see Zombrex (disambiguation).

"Hesitation is a conduit for infection."
—Zombrex poster

Ambuzol Vaspilatin or Zombrauctus Pendeo Autoinjectors, commercially marketed by Phenotrans as Zombrex, is a controversial drug in the Dead Rising universe that greatly slows the process of zombification. In Dead Rising 2: Case Zero, it must be taken every 12 hours, but by the events of Dead Rising 2 three years later, Zombrex's development has advanced, giving it a 24-hour effectiveness and being branded as Zombrex XC: Extended Care.[1][2] By Dead Rising 2, the pill can be taken orally in 200 mg doses.[3]

In Case Zero, Katey must be given Zombrex once during the mission Zombrex 1. In Dead Rising 2, Katey must be given Zombrex every 24 hours to prevent her from turning. Four doses of Zombrex are required throughout the course of 72 Hour Mode, which must be administered between 7:00 am and 8:00 am. This also applies to Frank West in Off the Record, who must take Zombrex every 24 hours.

Zombrex is expensive due to high research and development costs. This cost is passed on to the pharmacies, which is passed on to the consumer. The government subsidies this cost. Zombrex also does not require a prescription which leads to hoarding.[4]

Isabela Keyes created the drug after escaping the mall in Willamette. Her friend, Frank West, was also infected, and he uses Zombrex while the two of them are researching ways to come up with a complete cure.

Since Zombrex depends on Queens to be made, Isabela Keyes has been researching on a way to make a synthetic drug, though her work was stolen by Phenotrans, her employer. Despite this, Phenotrans has been telling the world that the drug is synthetic and does not depend on zombies or Queens anymore. Also, as revealed in Dead Rising 2: Case West, a cure has been discovered but Dr. Marian Mallon has kept it for herself, refusing to let the world know about it. Therefore, infected people everywhere depend on Zombrex.

In Dead Rising 3, Zombrex has taken on a new form, Zombrex GPS chips. These chips are designed to be surgically implanted under an infected person's skin, usually via the back where there's a good concentration of body fat, and routinely dose them each day with Zombrex so that they do not turn. If they do turn, the chip tracks them via GPS.

It's also revealed that, for infected U.S. citizens, Zombrex chipping has been made mandatory by federal law. An exhibit found in the Museum of the Americas reveals that shortly after the whole chipping concept was introduced, in regards to the new law, the government agreed to pay for the costs of national mandatory chipping, seeing as nobody wanted a repeat of Fortune City and that not everyone could afford Zombrex.

The original Zombrex dosage is still prominent on the streets, as a group of individuals called illegals refuse to be chipped by the government. They say that people that are chipped are living as a prisoner to the government with no right for privacy. The Illegals live "off of the grid" and still use the auto-injector used in previous games.

Since the Willamette Incident, Zombrex is widely sold in many pharmacies, and it is extremely expensive at $300 a box. It is also administered by government health care institutes and is carried by most ambulances. Dick Jones, a survivor in Still Creek, has some Zombrex in stock in his pawnshop.

In Dead Rising 2 and Off the Record, Zombrex can be found in hidden places, awarded from survivors, defeating psychopaths, or buying from pawnshops located in Fortune City, with the price rising in $25,000 increments with each purchase, starting at $25,000. It is important to note that like weapons, the player will lose their supply of Zombrex should they restart the story.

The following is a list of hidden Zombrex locations in Dead Rising 2. These will not respawn unless the player starts a new game.

Additionally, the player can buy Zombrex from any of the four pawnshops in Fortune City listed below:

The following missions reward the player with Zombrex upon completion:

The following is a list of hidden Zombrex locations in Dead Rising 2: Off the Record. 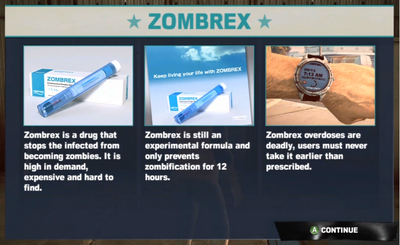 When Chuck Greene first picks up Zombrex in Dead Rising 2: Case Zero, there are two information screens that explain how Zombrex works. 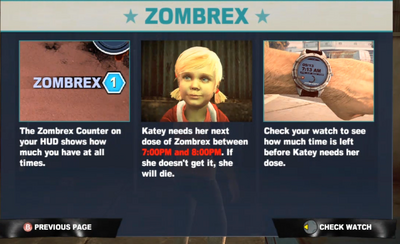 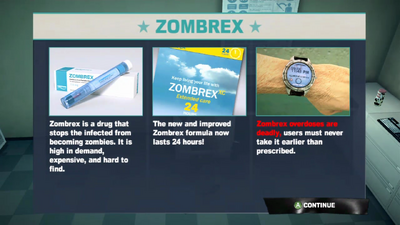 When Chuck Greene first picks up Zombrex in Dead Rising 2, there are two information screens that explain how Zombrex works. 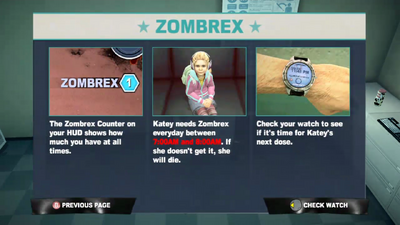 There is an educational promotional poster that can be found in-game, published by Phenotrans, explaining the precautions humans must take around zombies and the side effects of Zombrex.

The following is a list of characters in the Dead Rising series who are known Zombrex users:

Frank with Zombrex in Case West 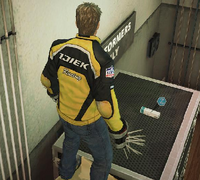 Zombrex hidden on the upper platform of Americana Casino

Graffiti on a Zombrex poster 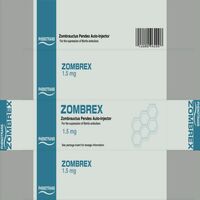 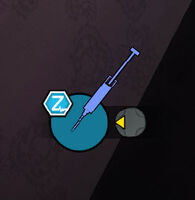 Prompt for the player to take Zombrex in Off the Record